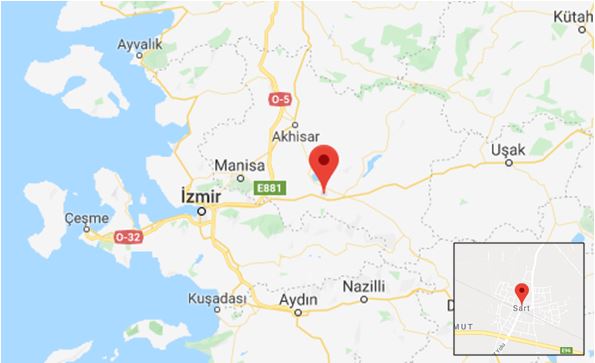 A city of Asia Minor , and capital of Lydia, situated about two miles to the south of the river Hermus, just below the range of Tmolus, on a spur of which its Acropolis was built. It was 60 miles northeast of Smyrna. It was the ancient residence of the kings of Lydia, among them Croesus, proverbial for his immense wealth. Cyrus is said to have taken $600,000,000 worth of treasure form the city when he captured it, B.C. 548.
Sardis was, in very early times, both from the extremely fertile character of the neighboring region, and from its convenient position, a commercial mart of importance. The art of dyeing wool is said to have been invented there. In the year 214 B.C., it was taken and sacked by the army of Antiochus, the Great. Afterward, it passed under the dominion of the kings of Pergamos. Its productive soil must always have continued a source of wealth; but its importance as a central mart appears to have diminished, from the time of the invasion of Asia by Alexander.
The massive temple of Cybele still bears witness, in its fragmentary remains, to the wealth and architectural skill of the people that raised it. On the north side of the Acropolis, overlooking the valley of the Hermus, is a theatre nearly 400 feet in diameter, attached to a stadium of about 1000 feet. There are still considerable remains of the ancient city at Sart. Travelers describe the appearance of the locality as that of complete solitude. The only passage in which it is mentioned in the Bible is Rev_3:1-6.

The ancient city was noted for its fruits and wool, and for its temple of the goddess Cybele, whose worship resembled that of Diana of Ephesus. Its wealth was also partly due to the gold which was found in the sand of the river Pactolus, and it was here that gold and silver coins were first struck. During the Roman period its coins formed a beautiful series, and are found in abundance by the peasants who till the surrounding fields. The ruins of the buildings which stood at the base of the hill have now been nearly buried by the dirt washed down from above. The hill upon which the acropolis stood measures 950 ft. high: the triple walls still surround it. The more imposing of the ruins are on the lower slope of the hill, and among them the temple of Cybele is the most interesting, yet only two of its many stone columns are still standing.