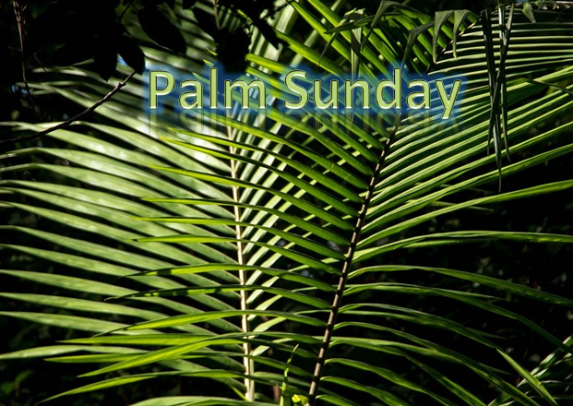 Dear Heavenly Father, the strength and the tenacity You had knowing that You were going to have to suffer unimaginable pain both mentally and physically. Lord You did not waver, unmovable in everyway to endure the humiliation and physical torture just so that I can be with you in Heaven. I thank you from every part of my being, and cannot wait to give You a hug and tell You how much that means to me. In Jesus Name Amen

Rejoice greatly, O daughter of Zion! Shout aloud, O daughter of Jerusalem! Behold, your king is coming to you; righteous and having salvation is he, humble and mounted on a donkey, on a colt, the foal of a donkey. Zechariah 9:9 ESV The next day the large crowd that had come to the feast heard that Jesus was coming to Jerusalem. So they took branches of palm trees and went out to meet him, crying out, “Hosanna! Blessed is he who comes in the name of the Lord, even the King of Israel!” And Jesus found a young donkey and sat on it, just as it is written:

“Fear not, daughter of Zion;

behold, your king is coming,

sitting on a donkey’s colt!”

His disciples did not understand these things at first, but when Jesus was glorified, then they remembered that these things had been written about him and had been done to him. The crowd that had been with him when he called Lazarus out of the tomb and raised him from the dead continued to bear witness. The reason why the crowd went to meet him was that they heard he had done this sign. So the Pharisees said to one another, “You see that you are gaining nothing. Look, the world has gone after him.” John 12:12-19 ESV

We know that in just a few days the leaders in Jerusalem will crucify Jesus because they felt threatened, they were afraid that they would loose their power. We all can learn a few things from what happened to Jesus, these leaders were blinded by their personal asperations, ignoring what they had in front of them. Jesus loves us so much that He even died for those that had Him nailed to the cross. Is there “stuff” that holds you back from seeing what is in front of you? It could be in the way of your family, friends, and even your salvation. We need to make sure that our “stuff” is in order so that it does not become a distraction from everything that is important. Jesus is our guide and will take us through turmoil, anxiety, and distractions. God has given us a owners manual that will show us how to deal with all the interference, sometimes it is like listening to an AM radio and all you can hear is static. As humans we seem to repeat history over and over again and in the bible, the entire bible, we are shown how to navigate the sometimes rough roads we have ahead.

The palm-tree has ever been an emblem of victory and triumph; Cicero calls one that had won many prizes plurimarum palmarum homo – a man of many palms. Christ was now by his death to conquer principalities and powers, and therefore it was fit that he should have the victor’s palm borne before him; though he was but girding on the harness, yet he could boast as though he had put it off. Mathew Henry’s Commentary on the Whole Bible

Sing aloud, O daughter of Zion; shout, O Israel! Rejoice and exult with all your heart, O daughter of Jerusalem! The Lord has taken away the judgments against you; he has cleared away your enemies. The King of Israel, the Lord, is in your midst; you shall never again fear evil. Zephaniah 3:14-15 ESV

Your Lord and Savior

Do you want to know Jesus and have that relationship to find out how and have the most love and protection you ever could imagine Click Here…..

“BibleGateway.” BibleGateway.com: A Searchable Online Bible in over 150 Versions and 50 Languages., http://www.biblegateway.com/‎.